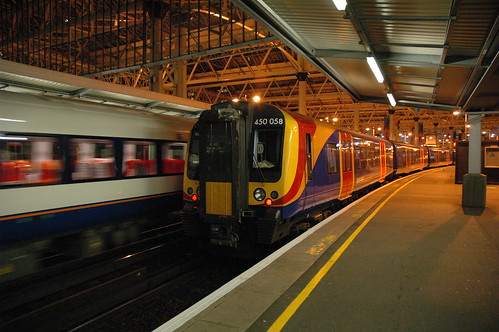 Today trains were delayed to and from Liverpool Street Station after a man was struck by a train at Brentwood station. The man walked away from the incident, but it lead to delays of an hour for many commuters during rush hour. However, often delays are due to a range of other causes. The following article from Ian Pearce at Arbilrail explains the reasons for some of the more common train delays.

Whether it is hot, cold or rainy, each one of these will cause your train to be delayed. So to be honest, you can’t really win. When the weather is hot it can cause the overhead wires to sag due to the heat making them expand. Trains have to be slowed down in this case to prevent the trains getting tangled up in the drooping wires.

So now the opposite, when the weather is frosty cold, this can also cause train delays. When the weather is below freezing and ice is formed on the tracks, this can cause havoc for people trying to commute on the trains. Trains are regularly delayed in the freezing cold weather, as basically it is just not safe for trains to be on the tracks going at the normal speed limit. Just as you would drive slower in ice and snow in a car, a train, believe it or not has to do the same.

Maintenance on the railway line is also very important, cleaning and maintenance of the tracks happens regularly and mostly overnight so it doesn’t affect your journeys through the day. But sometimes, problems may occur where some of the track needs to be tested during the day to ensure that it is safe for trains to continue travelling on the lines, this will cause delays whilst railway workers carry out rail safety procedures.

There are a variety of other reasons that can cause train delays, this could be due to a train which has broken down on the same track as you. So you will have to wait for that train to be recovered or fixed before the same track is used.

Some other causes can be natural such as the more recent landslide on to the track in Cardiff. However other reasons for delays can be more dangerous such as people being spotted on railway lines will cause delays.

Ian Pearce works as part of a rail safety team to ensure that all trains are safe to travel on. For more information go to www.arbilrail.co.uk/

Has Coronavirus Been The Final Nail in the Coffin for the High Street?

Where to Play Poker in Essex

Send your stories to EssexPortal.

View all posts by Your stories →

Well fibrewifi, roxwell road removing services from elderly pensioner because she dare tell them they wrong. They took money…

The Toot Hill Folk Club meets once a month in the Toot Hill Village Hall. Not your traditional Folk set…

EssexPortal - Can I Refuse My Neighbours’ Party Wall Application?

Best get some advice, but a shed against your wall should not be a party wall matter - your neighbour…

Dawn Baker - Can I Refuse My Neighbours’ Party Wall Application?

I have bought a tiny plot in Powys Wales. There is a stone garage on the plot that will be…